It’s been a while since I’ve posted anything, but I promise I have a good reason. On April 22 we got this news: 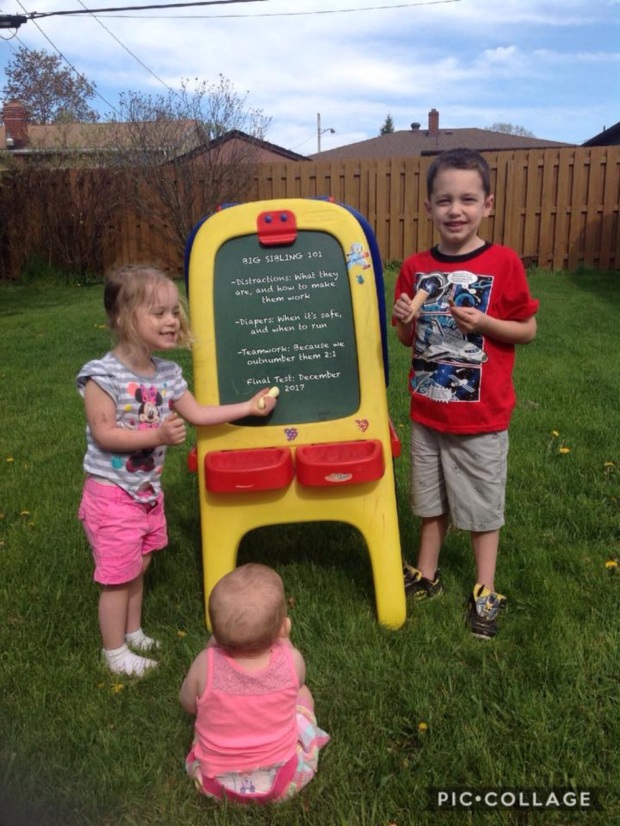 Baby #4 is on the way! I’m now 11 weeks, and estimated due date is Christmas Day. Even though we wanted another, and even though I suspected for a few days before testing that I was pregnant, there was still a lot of shock. Emotionally it took me longer to wrap my mind around this pregnancy (four kids!!) than I thought it would. A lot of fear and worry crept in when thinking of having four kids under the age of six. Thankfully, I have a close friend who is a mama to four young children that I was able to confide in, knowing she would understand my feelings. Those feelings of uncertainty lasted for a few weeks, and now I’m excited and ready to officially cross over into Large Family Territory!

The kids are excited as well. Iris obviously has no idea what’s going on, but Gunnar-and even Jana-are old enough to understand that there’s a baby in mommy’s tummy, and a new brother or sister will be here around Christmas time. It’s fun hearing their questions and listening to them talk about if the baby will be a boy or girl. It changes weekly, but right now Gunnar wants it to be a girl so that he has 3 sisters, and Jana wants twin boys so that she has 3 brothers! Hopefully they will be excited no matter if it’s a boy or a girl!

As far as pregnancy goes, this has by far been the easiest one. The other three pregnancies left me with all-day morning sickness and physically unable to move from the couch without getting sick. This time, I’ve had a few bouts of nausea, but for the most part have felt pretty good. A definite blessing with 3 active kids to keep up with! I believe a big reason why I have felt so good this time around is partly due to one change I made this pregnancy:

Ive never been able to keep prenatal vitamins down until switching to these. This is a gluten-free, non-GMO, plant-based prenatal with a probiotic. Taking this plus a protein-heavy breakfast first thing in the morning keeps me feeling good the rest of the day. The couple of times I’ve skipped the prenatal in the morning I’ve noticed those were the mornings where I felt sick.

In about a month we will hopefully know if we’ll be welcoming a boy or a girl into our family!

Yes, my hands are full, but so is my heart. And I wouldn’t want it any other way.